This bridge was built under the initiation of LuangPhorUttama, the abbot of Wang Wiwekaram temple. The construction between the year 1986 and 1987 was completed by labours of Mon people. The bridge was considered the route of an international friendship between Thais and Mons because it links together Sangkhlaburi district to the Mon community on the other side of the bank. Additionally, it became one of the well-known tourist attractions in Kanchanaburi.

It is unfortunate that on 28 July 2013 at 18.30, the bridge fell apart into two and 30 meters from the middle collapsed into the river. After 3 days long of heavy rain, there were flash floods sweeping down logs from ThungYaiNaresuan Wildlife Sanctuary. The collision worsened the situation as the damaged part was increased up to 70 meters by the afternoon of the next day. Therefore, a bamboo bridge has been built for temporary use, while Mon Bridge is currently under restoration. 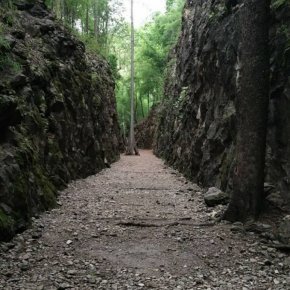